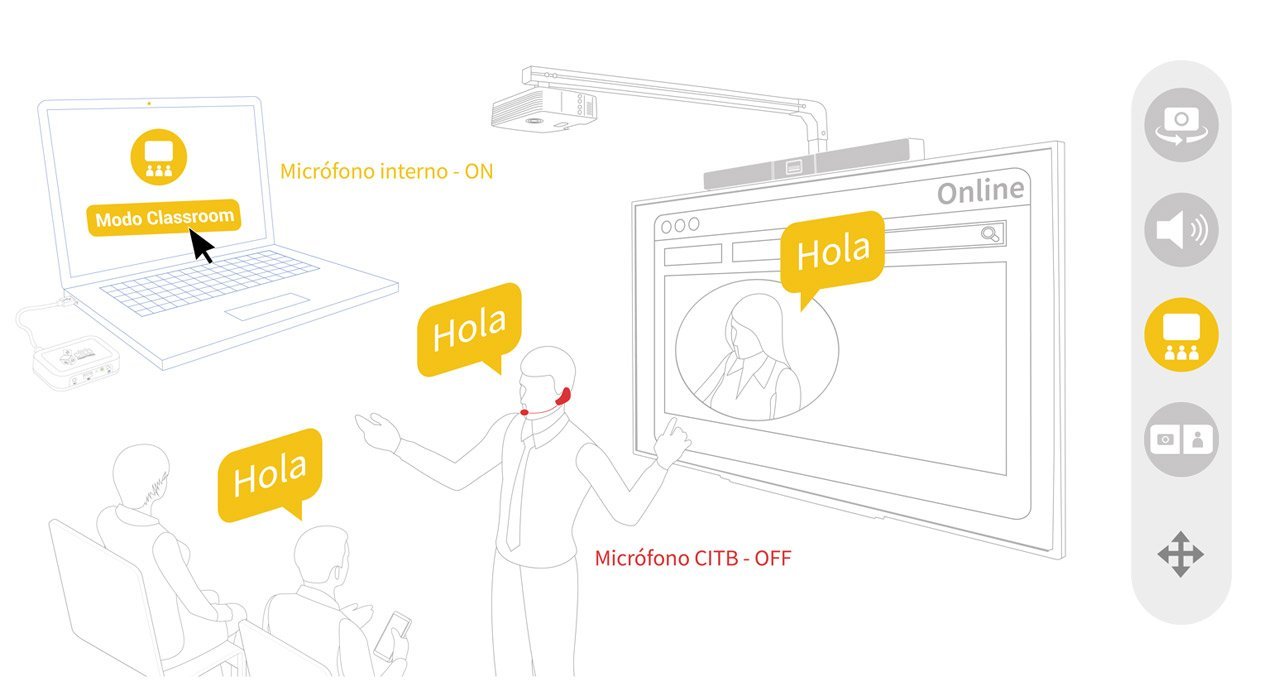 ClassInTheBox helps you to achieve a unique environment by integrating both remote students and those in the classroom, and this is essential for the class to function properly. It is not about having two parallel classes, each one at its own pace, but the class flows as one, although for certain strategies, such as learning stations (rotation stations) the students are doing different things, just as it would happen if they were face-to-face classes.

Managing a hybrid concurrent (or simultaneous, according to the nomenclature) class requires that there are times when we have the remote students to hear what their classmates are saying, and times when the in-class students have to listen to their absent classmates.

One of the effects of ClassInTheBox is the Silence Effect, which reduces the ambient sound in its entirety by clearly picking up the voice of whoever is wearing the wireless headset microphone, mainly the teacher. For this reason, we have designed the Classroom Mode in our extension for Google Chrome, which allows that during the time of the intervention of the students, the sound received by the remote students also includes the ambient sound of the class, where they are reading aloud, actively participating in a discussion, answering a question, or simply intervening aloud, after this time, the teacher can deactivate the Classroom Mode so that again the Silence Effect will come into operation, creating the acoustic comfort that an online class needs. For short interventions, it may not be necessary to activate the classroom mode but simply for the teacher to repeat or paraphrase what has been said aloud.

The fact that it is the remote students who have to speak aloud does not present a major difficulty; it is sufficient for the teacher’s computer to be connected to the classroom speakers so that everyone in the classroom can hear loudly and clearly what the student in question has to say. As is often done in online classes, the ideal is for remote students to have their microphone muted and only activate it when they are required to do so, perhaps by setting up a freehand system (the same as Google Meet, for example) or with some kind of application, such as ClassroomQ, which allows all students, regardless of their location, to ask written questions that the teacher can read out and answer aloud at certain times during the session or as they appear. The latter also serves to avoid prioritizing some students over others and to integrate both environments into one as we have been saying.

In short, ClassInTheBox combines the Silence Effect that allows the total reduction of annoying external sounds to the videoconference or recording with the Classroom Mode to allow the intervention of students in the classroom so that the whole class flows as if it were a single scenario.

You can learn more about what cookies we use or disable them on the settings.

This website uses cookies so that we can provide you with the best possible user experience. Cookie information is stored in your browser and performs functions such as recognising you when you return to our site or helping our team understand which parts of the site you find most interesting and useful.